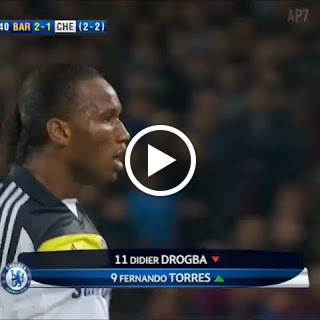 Fernando Torres had £50millions transfer fee to Chelsea from Liverpool. But he failed to perform close to the huge paid. Though he performed below expectation , but Chelsea fans will never forget that single goal that gave them the chance to play the final of their first UEFA champion league trophy.
The goal was special because the solo effort Torres made to score that goal. Secondly,it was the goal that decide the match.
Lionel Messi hit the bar with a penalty for Barca before Fernando Torres ran clear to seal the tie in injury time.
Earlier in the week, Torres had said “the best team does not always win”. His words were prophetic for England’s last men standing in Europe as they scrapped their way past the defending champions and into the final in Munich on 19 May.
That it was Torres who scored the goal after being so maligned during his time at Stamford Bridge made for the perfect ending to a famous night for Roberto di Matteo’s side.

About Oha 2862 Articles
I am a professional electrician.But i love writing about sports,especially football news