Vardy accept charges against him from FA for improper conduct 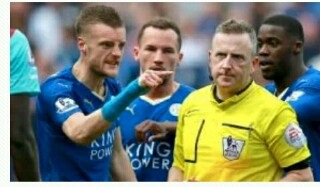 The striker will not appeal the FA’s decision but has requested a personal hearing which could delay an announcement on any further suspension for the 29-year-old.
Vardy is already suspended for this weekend’s home game against Swansea after being shown a second yellow card in the 56th minute of the 2-2 draw against West Ham.
His decision not to appeal is likely to limit any possible further suspension to only the game against Manchester United on May 1 and neither of the Foxes’ final two games against Everton and Chelsea.
Referee Jon Moss adjudged the striker to have dived under a challenge in the box from Angelo Ogbonna against West Ham, but Vardy reacted furiously by pointing and shouting in the face of the official before eventually leaving the pitch.
Any additional suspension will come as a huge blow to the Foxes, who are attempting to preserve a five-point lead over Tottenham Hotspur at the top of the Premier League with four games remaining.
Vardy has scored 22 Premier League goals this season, with only Spurs striker Harry Kane having scored more on 24.
The FA also charged Leicester for failing to control their players following the awarding of an 83rd-minute penalty to West Ham.
The club have accepted that charge too, and said in a statement: “Leicester City Football Club has today accepted a Football Association charge of failing to control its players during the Barclays Premier League fixture against West Ham United on 17 April.
“Furthermore, Jamie Vardy has accepted a charge of improper conduct arising from the same fixture. Jamie has, however, requested a personal hearing.”
Earlier this month, Chelsea striker Diego Costa wasgiven a one-match suspension, fined £20,000 and warned as to his future conduct after he protested angrily to referee Michael Oliver rather than leaving the pitch immediately after seeing red at Everton.
CategoryUncategorized
Tagsdiego costa ever suspended from league sports
Arsenal closing the gap between them and Leicester city
Club that finished 8th in English premier league could go Europa league