January 24, 2016 Off By Oha
ARSENAL 0-1 CHELSEA: COSTA
DOWNS GUNNERS AFTER
MERTESACKER SEES RED
Arsene Wenger’s side missed the chance to
move back to the top of the table after defeat
to the champions at the Emirates
Arsenal’s title hopes took a knock after Diego
Costa’s goal gave Chelsea a 1-0 win at the
Emirates after Per Mertesacker had been sent
off for the hosts.
The Gunners were reduced to 10 men after just
18 minutes, Mertesacker bringing down Costa
after the striker had been sent clean through by

a precise ball from Willian.
The Spain international then poured further
misery on Arsene Wenger’s side, guiding home
Branislav Ivanovic’s cross at the near post for
the only goal of the 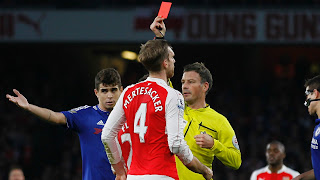 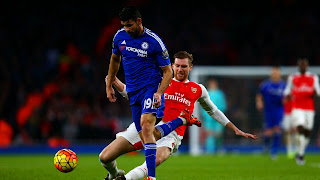 game.
Even the second-half introduction of Alexis
Sanchez – featuring for the first time since
suffering a hamstring injury in November – could
not spark Arsenal, who lost at home in the
league for the first time since the opening
weekend of the season.
Victory means Chelsea remain unbeaten since
Guus Hiddink replaced Jose Mourinho and they
have not lost in their last nine league meetings
with Arsenal, who are third, three points behind
leaders Leicester City.
Both sides had sights of goal in the opening
two minutes as Joel Campbell missed his kick
from Theo Walcott’s cross before Oscar –
recalled in place of Pedro – had a shot tipped
behind at the near post by Petr Cech.
The former Chelsea goalkeeper was called into
action again in the 15th minute as Willian fired
straight at him after Arsenal struggled to clear.
And Willian was heavily involved in the sending-
off three minutes later as his through-ball
released Costa, who looked to break away only
to be brought down by Mertesacker, leaving
referee Mark Clattenburg little option but to
brandish the red card.
That dismissal prompted Arsene Wenger to
send on Gabriel in place of Olivier Giroud, but
Arsenal were almost immediately behind as
Ivanovic’s superb cross from the right was
turned in by Costa from close range at the near
post in the 23rd minute.
Costa went close to doubling his tally shortly
before half-time only for Cech to save sharply,
and from the resulting corner Ivanovic’s header
was cleared off the line by Nacho Monreal.
For all Chelsea’s superiority, Arsenal had a
chance to level with the final act of the first half
but Mathieu Flamini volleyed Aaron Ramsey’s
clever pass over the crossbar.
In a quieter second half, Chelsea felt they
should have had a penalty shortly before the
hour when Koscielny body-checked former
Arsenal skipper Cesc Fabregas, but Clattenburg
was unmoved.
A frantic scramble in the Chelsea box raised
Arsenal hopes of an equaliser, but the hosts
could not force the ball in as Hiddink’s side
stood firm to claim back-to-back away wins
and move above West Brom into 13th place. Source: www.goal.com