Spain’s Jordi Alba believes his teammate Andres Iniesta will be part of football history.
While plenty of players have failed to shine at Euro 2016 so far, some potential stars have emerged and big names have delivered. 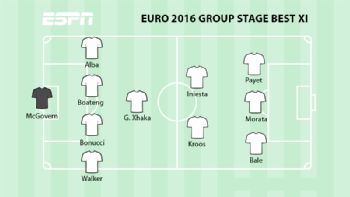 ESPN FC’s Euro 2016 XI so far.
GK Michael McGovern (Northern Ireland)
The superstar goalkeepers in this competition have rarely been tested though some, like Spain’s David De Gea and England’s Joe Hart, have made uncharacteristic mistakes. But McGovern was forced to save a barrage of shots to secure Northern Ireland’s passage into the knockout stage, including a memorable performance in the 1-0 defeat to Germany.
RB Kyle Walker (England)
England have played against three opponents determined to sit extremely deep, and therefore Walker hasn’t needed to concentrate on defending. Instead, he’s continually stormed forward, taking advantage of Adam Lallana’s drifts inside to overlap and provide a steady stream of crosses. Few players in this competition boast Walker’s combination of strength and stamina, and with many top sides struggling for full-backs, his attacking presence has been crucial to England’s impressive displays.
CB Leonardo Bonucci (Italy)
Antonio Conte’s most important player and not just for his defensive skills. The absence of Andrea Pirlo and Marco Verratti means Italy now look to Bonucci as their best playmaker from deep, and his wonderful pass to Emanuele Giaccherini to open the scoring in the 2-0 win against Belgium showcased these talents wonderfully. He’s also been solid defensively, in Italian three-man defence playing extremely deep.
CB Jerome Boateng (Germany)
The only centre-back in this competition who rivals Bonucci’s long-range passing. Boateng has been solid defensively, playing high up the pitch knowing he is capable of using his speed to outrun any strikers looking to sprint beyond him. But his contribution in possession has been even better, pushing forward with Mats Hummels to dominate matches. Has also hit some wonderful passes into the attackers. 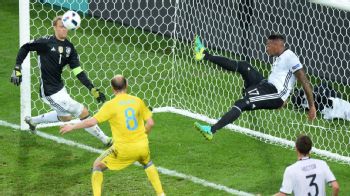 Jerome Boateng was at his best to brilliantly deny a Ukraine goal right on the line in Germany’s opener.
LB Jordi Alba (Spain)
Alba announced himself as Europe’s best left-back with a tremendous tournament four years ago and has continued that excellent form here. A scarily quick attacking full-back, Alba has often been the Spain player providing the most penetration. After teething problems playing behind Nolito in the opening 1-0 win against Czech Republic, he’s learned when to time his overlapping runs, creating two excellent chances for Alvaro Morata in the 3-0 win against Turkey.
CM Granit Xhaka (Switzerland)
In a somewhat functional Swiss midfield, Xhaka has provided excitement with his excellent long-range passing ability, continually hitting diagonal balls to encourage his full-backs into attack. While renowned as a fierce tackler, the new Arsenal midfielder has largely kept his discipline and used his midfield colleagues’ mobility to find pockets of space to create.
CM Toni Kroos (Germany)
This is a competition made for Kroos. With teams sitting back in deep defensive shapes rather than pressing high up the pitch, the Real Madrid playmaker has freedom to sit deep, collect the ball in space, and spray passes into the attackers. From the outset against Ukraine he commanded the midfield zone, against Poland he simply wasn’t tracked and against Northern Ireland he played some wonderful diagonal balls. No one has played more passes in this tournament.
CM Andres Iniesta (Spain)
The best tournament player of his generation. For the third consecutive European Championships, Iniesta has been wonderful. Whereas Vicente del Bosque has often used him in a front three, the international retirement of Xavi Hernandez and Xabi Alonso has allowed him to slot into his favoured central role, and he’s been instrumental in Spain’s passing moves. His contribution to Spain’s third goal against Turkey was remarkable, linking passes from box-to-box before playing the penetrative ball, too. 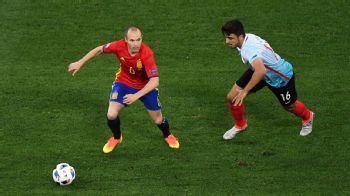 Andres Iniesta has enjoyed a superb campaign with Spain so far.
FW Gareth Bale (Wales)
Bale’s contribution from open play throughout this tournament has been minimal, but he netted the opener in Wales’ first two games with majestic long-range free kicks, the first deceiving Slovakia’s Matus Kozacik with some reverse swerve, the second eluding England’s Hart. Bale also poked in the third goal against Russia, and while not a consistent influence on games, he’s providing the moments of magic Wales require.
FW Dimitri Payet (France)
The hosts’ hero. Thumped an incredible 25-yard winner into the top corner in the tournament opener against Romania, having assisted the opener for Olivier Giroud in the eventual 2-1 win. He scored another fine goal against Albania and came close to a sensational volleyed winner against Switzerland. Also continually probing and creating from between the lines while showcasing the odd trick too, Payet is the advanced playmaker France desperately required.
FW Alvaro Morata (Spain)
Morata missed chances in Spain’s opening game, a narrow 1-0 win over Czech Republic. But, crucially, he was a proper centre-forward in the right positions to miss them, something Spain have often lacked. In the next two games, the goals arrived: two against Turkey and another against Croatia, all fairly simple finishes to convert crosses or square balls. He’s encouraging his teammates to attack the channels, adding another dimension to Spain’s play.

About adminfootball 2726 Articles
I am a professional electrician.But i love writing about sports,especially football news