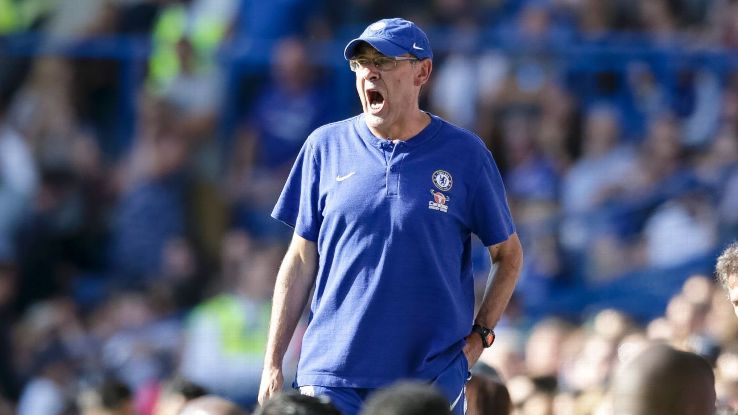 Maurizio Sarri must be thrilled that his footballing philosophy is now part of the Italian language.
Maurizio Sarri might still be waiting for the first trophy of his coaching career but the Chelsea head coach’s impact on the football world stretches far beyond mere silverware.
“Sarrismo,” the term his followers coined to describe the distinctive style of attacking, possession-based football he refined during three spectacular seasons in charge of Napoli, has made it into Italy’s Treccani Encyclopaedia.
Describing the honour as Sarri’s first trophy of the season, the official Twitter account of Treccani also cited a quote from Italian newspaper La Repubblica, which warned that Sarri has given birth to a style that may one day be used against him by opponents.
“And if a Sarrista were to beat one of Sarri’s former clubs with the style the orphaned side have lost then Sarrismo must be considered a method not a fashion,” the quote read.
It remains to be seen whether or not Treccani’s decision will help “Sarrismo” gain traction in England, where Sarri’s style of play at Chelsea has been widely referred to as “Sarri-ball.” French newspaper L’Equipe referred to his football as “vertical tiki-taka,” acknowledging its similarities to the footballing philosophy of Manchester City manager Pep Guardiola.
Asked to explain “Sarri-ball” in an interview with Sky Sports last month, he replied: “I like it when the team is in control of the match. I like very much the ball possession, I like to play in the other half.
“Ball possession but at a very high speed. Mental speed, first of all, not only ball possession in my half. Maybe I’ve learned it from a lot of lost matches, I think!”