Advertisements
Advertisements
Drinkwater missing out.
England boss Roy Hodgson had already said that Manchester City midfielderFabian Delph would be cut from the provisional 26-man squad due to a groin injury.
Rashford was a surprise inclusion in the provisional squadafter only having made his Manchester United debut in February, but the 18-year-old scored and was named man of the match in a 2-1 win over Australia on his England debut on Friday.
There had been concerns for Sturridge’s place in the squad after he missed both the Turkey and Australia friendlies with injury, but he has returned to training and is one of five forwards in the final squad. 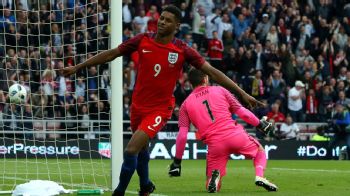 Marcus Rashford scored on his England debut against Australia in Friday.
Hodgson has opted to leave out Leicester City midfielder Drinkwater, who won his third cap against Australia, and Newcastle winger Townsend, who had fallen out of favour earlier in the season after being frozen out during his final months at Tottenham.
Drinkwater wrote onInstagram: “Disappointed not to make the final 23! Would of been a fantastic experience to go to the euros as a player… But I’ll be supporting the country like I always have!
“The seasons been a huge positive for me.. Going into next season as a premier league champion! Good luck to the lads… Bring it home #england”
Jordan Henderson and Jack Wilshere are included despite only recently returning from injuries, while Hodgson has opted to take only three centre-backs, although defensive midfielder Eric Dier also has experience in the position.
Hodgson will hold a news conference on Wednesday, with England due to play their final warm-up match for Euro 2016 against Portugal at Wembley on Thursday.