MANCHESTER, England — The impression had been given of late that, if the Manchester City manager’s job was not quite a poisoned chalice for Pep Guardiola, then it was at least a stale pint of beer.
Based on his future club’s recent performances, it appeared that his inheritance would be an entirely inadequate defence as well as a lacklustre midfield and that his only hope of enjoying Champions League football next season would be if current boss Manuel Pellegrini prevailed in the indignity of a three-way tussle with Manchester United and West Ham for fourth place.
But more than that, they reminded the world that they are not an expensive busted flush and that they still boast significant attributes. Further, this victory means a more glorious route to next season’s competition — winning the European Cup — remains open.
On a night when you could question what exactly PSG had bought with all of their money, City at least were able to show that the £55 million spent on Kevin De Bruyne had begun to pay dividends.
The Belgian was the difference between the two teams, not simply because it was he who struck the decisive goal after 76 minutes but in the dynamism of his play throughout.
By contrast, Laurent Blanc’s visitors were never able to get into their groove and kept having to shuttle back to put out fires. With Blaise Matuidi suspended, PSG had little left in the armoury to withstand the pressure when Thiago Motta pulled a hamstring and went the way of Marco Verratti, also injured.
The French champions ended the game with the cultured Adrien Rabiot as a de facto defensive midfielder, while the all-star cast of Zlatan Ibrahimovic, Angel Di Maria, Edinson Cavani, Javier Pastore and Lucas Moura chased in vain for the two goals required for salvation. It was not the most cohesive of formations.
City have played in fits and starts this season, occasionally demonstrating football that fizzes, but often only their play has stagnated. De Bruyne, though, has shown an admirable willingness to dictate his own terms to the game from his first appearance for the club. One wonders if City’s Premier League “title challenge” would have required quotation marks had he not missed more than two months of the season.
The truth, of course, is that his absence is only one reason for City’s poor form in recent months. Recurring injuries to Vincent Kompany have left the backline worryingly vulnerable. The best years of Martin Demichelis’ career come with a sepia filter, and neither Eliaquim Mangala nor Nicolas Otamendi have acquitted themselves with style, composure or even, on occasions, basic competence.
On Tuesday, though, they could not have done more to see their team over the line. Up against an Ibrahimovic eager to take what might be his last chance of Champions League glory, the often-hapless pair were suddenly disciplined and formidable.
In the second half, as Blanc lurched from one ambitious game plan to another, throwing still more attacking midfielders into the fray, Mangala and Otamendi held their nerve. Some would say that PSG did not test them, that they made very few chances, but there is a reason for that. They were hardly ever allowed to.
“I was very happy for both [Mangala and Otamendi],” said Pellegrini afterward. “I don’t think they have had bad seasons. Maybe they had some individual mistakes in some games… but I am very happy for both of them because they have a lot of criticism. If you review their complete performance over the year I think they did well.”
Whichever team lost here would have serious questions asked about the net gains from their spending. City, therefore, will be thankful to have avoided the scrutiny that PSG will now face after a fourth straight season in which, despite lavish outlay under their Qatari owners, they have been unable to match the run to the semifinals made by PSG’s class of 1994-95.
It really could have been worse for the Parisians. If Sergio Aguero had converted his first-half penalty, if Kevin Trapp had been sent off for the foul that saw it awarded, if any of the mistakes by the erratic Serge Aurier had been punished, it would have been. But they are problems for Blanc. And he knows it.
“Of course I am responsible,” he said afterward. “I put the team together, selected it, the strategy we used. When we win, it is the players. When we lose, I take responsibility. Even though we made a few mistakes in the first match, we were still hopeful we could score tonight. We thought we would create plenty of chances. City surprised me more tonight. They were very solid, particularly in the middle of defence. Ultimately the buck stops with me.” 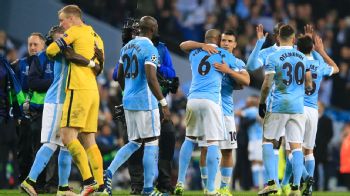 Manchester City have reached the Champions League semifinals for the first time in club history.

Pellegrini opted not to bask in the glory, choosing to compliment his team and refusing to be drawn on suggestions that this performance could help him find a rewarding posting when he leaves the club at the end of the season. But it certainly will.
Nothing on Tuesday night should suggest that City’s victory suddenly makes them favourites in the semifinals, or that it elevates them to the level of Europe’s elite. There is still more to do and it needs to be done repeatedly before the club can occupy those heights.
But in a largely disappointing campaign, this was a positive night for the club. It must not be forgotten that, when the quarterfinal draw was made, PSG were installed as overwhelming favourites.
Even after City’s two away goals and despite history’s compelling evidence that first-leg scorelines are rarely recovered, Blanc’s side were still much fancied ahead of kickoff in the return fixture.
But City stood up, stood strong and they did their job, and that is worth celebrating, not least if you’re planning to take over as the club’s manager this summer.
CategoryUncategorized
Tagssports
Real Madrid overturned first leg tie ti quality
UEFA Champions league halftime result