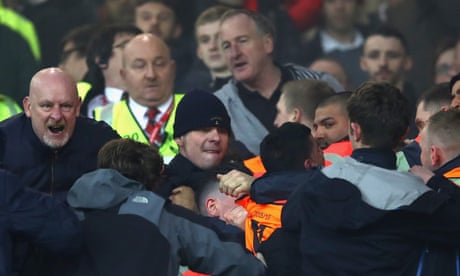 Uefa charges Manchester United and Liverpool over Europa League trouble
Manuel Pellegrini’s side beat Dynamo Kyiv in the last round to reach the last eight for the first time and their reward will be tie against the reigning French champions.
Elsewhere, Barcelona’s quest to retain the title they won last year will see Luis Enrique’s side take on La Liga rivalsAtlético Madrid. Wolfsburg’s reward for reaching this stage of the competition for the first time is a tie against 10-time winners Real Madrid, while Bayern Munich face Benfica in the other tie.
The quarter-finals will take place on 5-6 April and 12-13 April.
City are currently fourth in the Barclays Premier League table, four points ahead of sixth-placed Manchester United, whom they host on Sunday.
While not yet conceding the championship race, overhauling a 12-point deficit on leaders Leicester remains a difficult task for Manuel Pellegrini’s side, who last month won the Capital One Cup with victory over Liverpool at Wembley.
Getting past PSG and into the semi-finals of the Champions League will also prove no mean feat – especially with Vincent Kompany injured again.
Laurent Blanc’s men have already wrapped up the Ligue 1 title in style, inspired by veteran Swedish forward Zlatan Ibrahimovic and showed withtheir 4-2 aggregate victory over Chelsea in the last 16 that they remain very much determined to prove themselves a continental super-power.
City and PSG have met just once before, playing out a goalless draw in Manchester during the group stages of the 2008/09 Uefa Cup.
Real, 10-time winners of the European Cup, squeezed past Roma to get through to the last eight, while city rivals Atlético needed a dramatic penalty shoot-out victory to see off the challenge of Dutch champions PSV Eindhoven following two goalless legs.Thanks
Atlético faced Barcelona at the quarter-final stage of the 2013/14 campaign, winning 1-0 at home after a 1-1 away draw to progress en route to the final in Lisbon, where they lost as Real secured ‘La Decima’.
However, Barcelona, the five-time champions who comfortably defeated Arsenal in the last 16, have won their last six meetings with Atlético.
The first leg will be played at the Camp Nou, with the return at the Vicente Calderón.
City will travel to Paris for the first leg, which takes place on 6 April, with the return scheduled for 12 April at the Etihad Stadium.
Manchester City’s director of football Txiki Beriguistain accepts it is a tough draw, but once which the team will face head on.
“My first reaction was ‘wow’ but we’ll do our best, we have confidence in our team,” Beriguistain said.
“PSG are a really tough opponent. They’re a very complete side in all aspects, but we’re dreaming about continuing.
“PSG are growing year upon year, they’re in the quarter-finals, but they want to get to the semi-finals. We need to recover some players and hopefully we’ll play a competitive tie.”
Champions League quarter-final draw
Wolfsburg v Real Madrid; Bayern Munich v Benfica; Barcelona v Atletico Madrid; Manchester City v Paris Saint-Germain.