Luis Enrique has confirmed he will quit as Barcelona  coach when his contract expires in the summer.
The Barca coach has been always asked about this season about whether he would commit to the club beyond the current campaign but has always refused to respond.
On Wednesday, he announced his decision to leave during his postmatch news conference after his side’s 6-1 win against Sporting Gijon.
“I will not be manager of Barcelona next season,” he revealed. 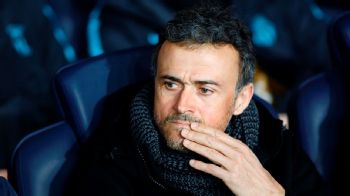 Luis Enrique led Barcelona to a historic Treble during his first season in charge.
“In preseason I had a meeting with [club directors Albert] Soler and Robert [Fernandez], during which I spoke about the possibility of not renewing.
“They told me that there was no rush to decide. But the moment has arrived.
“The reason is the way I have to live this profession, constantly looking to improve. It means I have very little time to rest.
“It’s been a difficult, but well-thought-through decision. I need to rest. I would like to thank the club for the confidence they have shown in me and for three unforgettable years.”
Barca are still fighting to win three competitions, and Enrique called for complete focus from everyone involved with the club between now and the end of the season.
“There are three months left, and we are in a difficult situation, especially in one competition [the Champions League],” he said.
“But with the help of everyone — and if the stars align — we can turn things around [against Paris Saint-Germain on March 8].
“My dedication during the coming three months will be total.”
Barca won the Treble in their first season under Enrique after he replaced Gerardo Martino in 2014 and followed it up with a double last season.
However, performances as much as results this season have led to increased speculation over his future.
It’s long been rumoured in the local media that he would walk away from the club in the summer. Now that he’s taken the chance to confirm his decision, thoughts will turn to who could replace him.