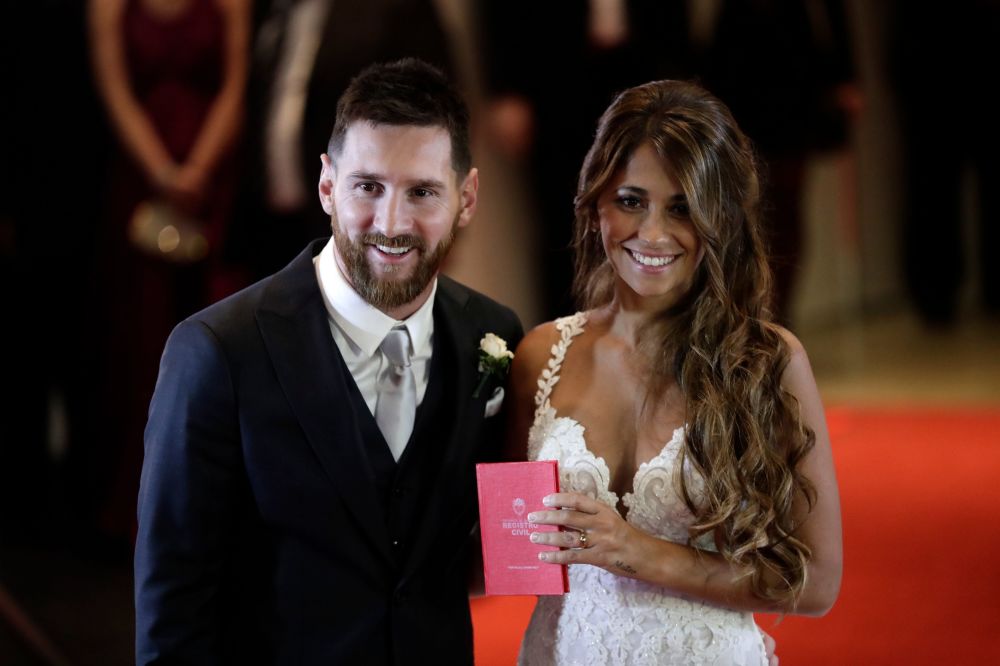 Newlyweds Lionel Messi and Antonella Roccuzzo pose for photographers after tying the knot in Rosario, Argentina – Copyright 2017 The Associated Press. All rights reserved.
Lionel Messiand his childhood sweetheart married Friday night at a ceremony in his Argentine hometown attended by some of the biggest names in soccer.
About 250 guests attended the marriage of Messi and Antonella Roccuzzo at a luxury hotel. They included Messi’s Barcelona teammates Neymar, Luis Suarez and Gerard Pique, who was joined by his wife, Colombian pop star Shakira.
Argentines were abuzz over the wedding in Rosario, an agricultural hub and the country’s third-largest city about 300 kilometers (186 miles) northwest of Buenos Aires.
About 150 journalists were allowed to cover the event, but had no direct access to the ceremony or the party afterward.
Curious onlookers gathered before the wedding near the heavily guarded site hoping to snap photos of the soccer stars.

Carles Puyol, from right to left, Vanessa Lorenzo, Cesc Fabregas, Daniella Semaan, Xavier Hernandez and Nuria Cunillera, pose on the red carpet Credit: Victor Caivano/AP
“We think it’s great that Messi has come to Rosario to get married,” said Julio Sosa, who cleans windows for a living.
Messi, 30, grew up in a lower-middle-class neighborhood in Rosario along with two brothers and a sister. His bride, 29, was the cousin of a close Messi friend and the two shared a close relationship from a young age.
Messi and Roccuzzo stayed in touch after he left to play soccer in Spain at age 13 and they eventually started a romantic relationship in the late 2000s.
Roccuzzo moved to Barcelona, where the couple live with their two sons: 4-year-old Thiago and 1-year-old Mateo. But they often return to their native Rosario.”Messi could have had this wedding wherever he liked — Dubai, the moon. He can pay any plane ticket to anyone, but he chose the city that’s in his heart,” said Leandro Macaya.

Newlyweds Lionel Messi and Antonella Roccuzzo kiss while posing for photographers on the red carpet Credit: Victor Caivano/AP
Messi, a five-time FIFA world player of the year, has faced criticism in Argentina because he has never brought the country a major title, in contrast to his repeated successes playing for Barcelona. But he is praised both at home and abroad for keeping his common touch.
“He was always the same and he never changed,” said Diego Vallejos, a childhood friend who was invited to the wedding.
“Despite everything that he’s accomplished in life, he’s still the same simple kid, the skinny dude that I grew up with. It’s hard to explain the feeling — I’m both a friend and a fan.”