Kanu nwankwo had a great impact on career._————-Wenger 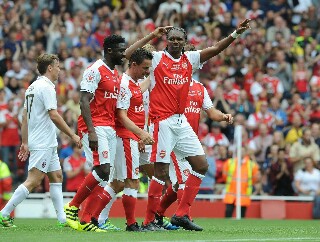 Manager of Arsenal football club, Arsene Wenger
on Friday said former Nigeria international,
Nwankwo Kanu, had a great impact on his career.
Wenger was speaking as he celebrates 20 years as
the Gunners manager, describing Kano as one of
the most outstanding African players he worked
with at the club.
He also heaped praises on Kolo Toure, while
reflecting on his time at Arsenal, and went ahead to
reserve praise for the likes of Victor Ikpeba and
George Weah who played under him at AS Monaco.
He said, “African players had a massive impact on
my career because I always managed them right
from the moment I started in the top league in
France.
“I had African players at Monaco and I like the fact
that they were creative and they are usually
attacking players with imagination. They have pace
and power as well, and they usually combine
strength and agility well. That’s very difficult to
find.
“Africans are hugely passionate people and there
is a big passion in Africa for the game. They are
happy on the football pitch and that’s something
which has been fantastic for us.
“Kanu had a massive impact here, Kolo Toure too,
I had George Weah too… so all these players had
a massive impact.”
CategoryUncategorized
Tagssports
Inter Milan lost in the second Europa match
Arsene Wenger top England manager's job shoplist