Home Uncategorized Is Unbelievable———–jurgen klopp
Facebook
Twitter
Google+
Pinterest
WhatsApp
Liverpool manager Jurgen Klopp has hailed his side’s “hard to believe” Europa League quarterfinal comeback over Borussia Dortmund on Thursday, and says the thrilling encounter represents the best of what European football can offer.
Liverpool got off to a horrible start as Dortmund scored twice in the opening nine minutes to leave Liverpool needing three.

Live football odds with bet365. Bet Now »
After Divock Origi pulled one back early in the second half, Dortmund scored again to seemingly end the tie, but Philippe Coutinho, Mamadou Sakho and Dejan Lovren had other ideas, with Lovren’s stoppage-time header for a 4-3 win sealing a remarkable comeback.
Klopp said: “It’s difficult to explain. It was a wonderful, wonderful night. The game was strange from the beginning.
“When we brought on Joe Allen and Daniel Sturridge, we gave the message to show character. If we lose, we don’t care but we have to show character and okay, they did a lot more than that.
“It was brilliant. I think that’s what European football can be at its best. It was a wonderful experience and it’s hard to believe it really happened.”
Origi revealed Klopp encouraged his players to make history before they mounted their stunning comeback to beat Borussia Dortmund and reach the semifinals of the Europa League. 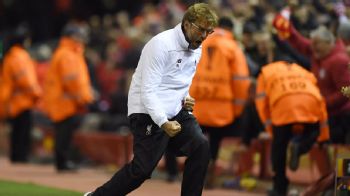 Jurgen Klopp encouraged his players to make history on Thursday.

Origi told BT Sport: “It was very special. At half-time, the coach said we had to create the moment where we could tell our grandchildren, our children about, make a special night for the fans.
“We believed. I think when we scored the first goal we all felt it could be a special moment.”
Lovren said of scoring the winner: “It’s an amazing feeling. I think it was one of the best games of the last two or three years. We never stopped believing in ourselves. We said at half-time we had nothing to lose, we just had to believe. It was a great effort from everyone.”
Henrikh Mkhitaryan and Pierre-Emerick Aubameyang had put Dortmund 2-0 up inside the opening 10 minutes with Liverpool appearing shell-shocked, and Lovren had to stop himself swearing when asked about the start.
“Of course we didn’t expect a start like this, it was a sh… start, but we all showed character and never stopped believing. Nothing is over.”
Sakho added: “The most important thing today was the team played with heart and the fans never, never leave. They always shout together. This is a win for the Liverpool country.
Source: ESPN