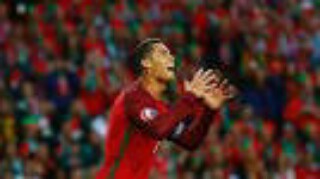 Portugal star Cristiano Ronaldo hit out at Iceland’s lack of ambition after the two sides drew 1-1 at Euro 2016.
The Real Madrid star also refused to shake the hands of the Iceland players after the group match in Saint-Etienne.
“I thought they’d won the Euros the way they celebrated at the end,” he said.
ADVERTISEMENT
“It was unbelievable. We tried hard to win the game and Iceland didn’t try anything. This, in my opinion, shows a small mentality and they are not going to do anything in the competition.”
Ronaldo, making his 127th appearance for Portugal, said it had been a “lucky night” for his opponents and accused them of putting “the bus in the net”.
Portugal had 72% of the possession and 26 shots on goal to Iceland’s four.
Ronaldo spurned a great chance to secure victory for Portugal
“Portugal try to play football and try to win the game,” said Ronaldo.
“Iceland didn’t try anything. They were just defend, defend, defend and playing on the counter-attack.”
Ronaldo’s action have drawn plenty of comment on social media.