Leicester City manager Claudio Ranieri says he doesn’t want to lose any of his star players, and only wants to sign those with the right mentality after winning the Premier League title.
Tottenham Hotspur’s 2-2 draw at Chelsea on Monday night left Leicester with an unassailable seven-point lead at the top of the table with two games to play.
Ranieri can now start planning for next season, when the Foxes can also look forward to a first-ever season in the Champions League — where they will be one of the top seeds alongside the champions of the other top-seven leagues and the title holders.
It means the coach will have to strengthen his squad to deal with the demands of European football, but he is eager to recruit players with the right temperament. 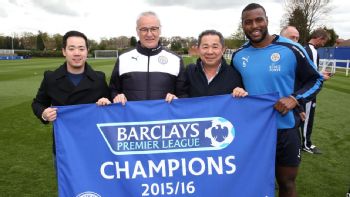 Advertisements
Popular Stories Right now
Euro 2020: Turkey vs Italy
Asked if the Foxes could repeat their amazing success next season, he told Sky Sports News: “I think no, but we want to continue to build.
“When I came here the objective was to create a solid foundation and build together. This season is out of our project but our foundations are very solid and we want to do our best.
“We don’t want to sell anybody. If some player doesn’t want to stay with us I don’t want unhappy people.
“We are looking to add to the team but with the same mentality. Who comes must know we are working hard.”
Looking ahead to Leicester receiving the Premier League trophy at the King Power Stadium on Saturday, Ranieri added: “I feel good now. [Picking up the trophy] in front of our fans it will be fantastic.”
It is also Ranieri’s first top-flight triumph in his managerial career and the 64-year-old admits emotions were running high when the full-time whistle blew at Stamford Bridge.
“The emotion was at the maximum level,” Ranieri added. “It means the job is good. I am very, very happy now because maybe if I won this title at the beginning of my career maybe I would forget.
“Now I am an old man I can feel it much better.
“I said every time I am very happy for the fans, for the chairman and for all the Leicester community,” Ranieri added. “I don’t know the secret. The players, the heart, the soul and how they play.
“My message to the fans is now to keep going, we want to improve a lot.”
Ranieri had been visiting his 96-year-old mother in Rome on Monday but landed at East Midlands airport in time to return home and watch Tottenham’s draw.