Home Uncategorized How UEFA decided the third best loosers.
Facebook
Twitter
Google+
Pinterest
WhatsApp
Slovakia, Republic of Ireland, Portugal and Northern Ireland have taken the four best third-place berths and round of 16 spots, with Turkey and Albania missing out. 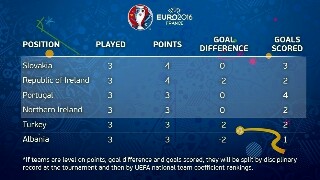 The four best third-placed teams are determined according to the following criteria applied, in the order given, to the final tournament group matches:
a. higher number of points obtained;
b. superior goal difference;
c. higher number of goals scored;
d. disciplinary record in the final tournament (fewest points in thedisciplinary points ranking);
e. position in the UEFA national team coefficient rankings.

adminfootball - August 14, 2020
0
The Premier League season is over, but transfer rumors are heating up for some of the biggest clubs...

There are no excuses’ – Simeone admits that Atletico earned Champions...