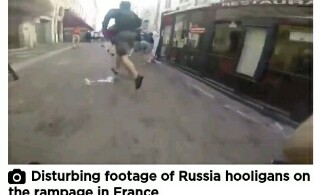 Disturbing footage of Russia hooligans on the rampage in France

On the pitch, Euro 2016 has been excellent, but fighting among fans has ruined things off it.
In Marseille, trouble marred England’s opening game against Russia as both sets of supporters clashed outside of the stadium while unsuspecting England fanscame under attack inside the Stade Velodrome.
And here, Russian hooligans have uploaded disturbing footage of the sickening clashes on the streets of Marseille shot from their point of view.
A city prosecutor said a group numbering around 150 of “well trained” Russian football supporters were behind the violence. They “were well prepared for ultra-rapid, ultra-violent action” and were able to evade arrest he explained.
Watch here. http://talksport.com/