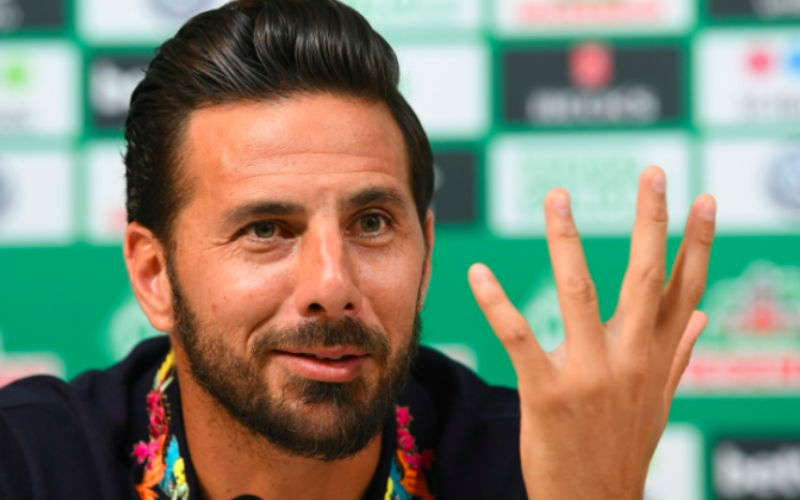 Veteran Werder Bremen striker Claudio Pizarro turns 40 on Wednesday and hopes to keep adding to his haul of 192 Bundesliga goals, a record for a foreigner in the German league. (AFP pic)
BERLIN: After making his 450th Bundesliga appearance last weekend, Werder Bremen striker Claudio Pizarro turns 40 on Wednesday, yet the ex-Chelsea and Bayern Munich forward has no plans to hang his boots up just yet.
“I enjoying playing football, even at 40, and I will keep doing it until my body says ‘no more’,” said Pizarro.
“Maybe this will be my last year, but I will see after this season,” he added. Pizarro’s one-year contract expires in June.
“All I need is a ball and a match to play in.
“Bremen is a charming city and the fans love me here.”
No wonder Pizarro is a fans favourite at Bremen.
He is on his fourth stint at the club for whom he has made 276 appearances, netting 144 goals, since making his Bundesliga debut, aged 20, for Bremen in 1999.
After leaving the Weserstadion for spells at either Bayern Munich, Chelsea or Cologne, he always came back to Bremen and his three children were all born in Germany.
Pizarro proved he still has it by hitting the post in Bremen’s 2-1 defeat at Stuttgart last Saturday.
He is in the curious situation of being four years and two days older than Bremen’s head coach Florian Kohfeldt, who turns 36 on Friday.
“Claudio is a very important player for us, although perhaps not in every game,” said Kohfeldt, who has started Pizarro once, with three substitute appearances, in Bremen’s six league games this season.
He holds the Bundesliga record for the most goals by a foreign player, scoring 192 times with a further 75 assists, for Bayern, Bremen and Cologne, where he spent last season.
However, Bayern’s Poland striker Robert Lewandowski is closing fast with 183 league goals.
Andes Bomber
Pizarro played at Chelsea from 2007-2009, joining the club on a free transfer from Bayern, but never really made it at Stamford Bridge with two goals in 21 league appearances.
When Jose Mourinho suddenly quit in September 2007, two months after his arrival, Pizarro struggled to play under Avram Grant and was loaned back to Bremen in August 2008.
The sight of Bremen fans queuing up to buy his shirt reflects the popularity of the player who scored 38 goals in his first two seasons in Germany.
Pizarro also won 17 titles in nine seasons at Bayern, where the Peru international was dubbed ‘the Andes Bomber’ – a play on the nickname of Munich legend Gerd ‘Bomber’ Mueller.
In his two spells at Bayern, in 2001-2007 and 2012-15, he lifted the Bundesliga title six times and the German Cup five times, plus the Champions League trophy in 2013.
He was part of the 2013 treble-winning squad which lifted the European trophy, beating Borussia Dortmund at Wembley in an all-German final, but Pizarro only played a total of 14 minutes in the knock-out stages.
As back-up to first-choice striker Mario Mandzukic, Pizarro started just seven of his 20 Bundesliga appearances in 2012/13, but still managed to score six times.
He hit four goals, provided two assists, in the 9-2 thrashing of Hamburg in March 2013 and backed that up with two goals and two assists in a 6-1 away rout of Hanover the following month.
His longevity is down to his easy-going manner and ruthless ability to finish chances.
“Claudio is a rascal, but has always been eager to play and played well when he did,” his former Bayern coach Jupp Heynckes told Kicker.