EGYPT NOT A THREAT TO NIGERIA, SAYS VICTOR MOses

The winger does not see any real threat to Eagles qualifying for Gabon 2017, despite staying two points behind the Pharaohs
Victor Moses has played down Egypt’s chances of beating Nigeria to the 2017 Africa Cup of Nations ticket.
According to the West Ham United player, Hector Cuper’s men bow to the Super Eagles in Friday’s Afcon qualifier billed for the Ahmadu Bello Stadium, Kaduna.
“Is Egypt a threat to us, I will say no but we they are a great team but we have the advantage of playing at home with our Kaduna fans fully backing us to win,” Moses toldGoal.
“We are prepared for this game and it is going to be a difficult but interesting match and I am looking forward to it. But we need to work together as a team and we will get the result we are looking for.
“We have the players that can beat the Egyptian team but we need to play together in practice sessions and blend as a team and also perfect our strategies for the game.”
He also expressed delight playing under Coach Samson Siasia who made sure he switched allegiance Nigeria instead of England.
“Samson Siasia is a good manager. He is the one that brought me into this Super Eagles team,” he continued.
“But due to circumstances I couldn’t play a game under him then. But I am very happy that I am back under him now as the Super Eagles Manager.
“He is a solid tactician and he is doing very well. It is going to be great playing under him,” he concluded. 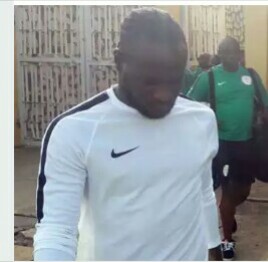