The After Dark panel discuss Cristiano Ronaldo’s game against Hungary and his attitude in France.
Cristiano Ronaldo’s confidence will have been given a boost by scoring his first two goals of Euro 2016 in Wednesday’s crucial 3-3 draw with Hungary, Portugal coach Fernando Santos said.
Ronaldo had struggled in the first two games of the European Championship, criticising Iceland following a 1-1 draw in Portugal’s opener and missing a penalty in the 0-0draw with Austria.
But the Real Madrid forward twice helped Portugal come from behind to earn a point against Hungary in their final group game and progress as one of the four best third-placed teams at Euro 2016.
“This is what Cristiano is all about, because he’s a winner and a scorer, he feeds on goals,”Santos said. “This will have increased his confidence levels. He’s a confident player anyway, but this will have boosted him for the next game against Croatia.” 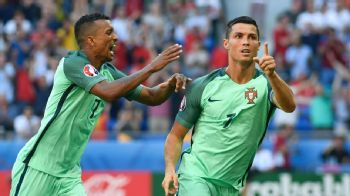 Cristiano Ronaldo will have taken confidence from his brace against Hungary, according to his manager.
Second round opponents Croatia beat Spain 2-1 on Tuesday to finish top of Group D and set up the round-of-16 draw that Group F’s third-place side didn’t want.
“Croatia are one of the sharks, we had been trying to avoid them,” the Portugal manager said. “They placed first in a group with Spain, which tells you all you need to know about them.
“The most important thing is that we are through to the knockout stage. We had wanted to finish in first place, to move on, but not like this.”