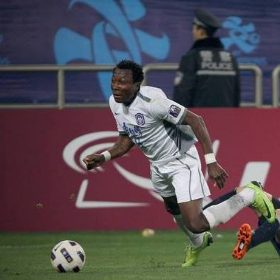 Experienced Nigerian-born striker Obiora Odita got on the scoresheet but could not prevent his team Mladost Lucani from losing 4-1 to Partizan Belgrade in the Serbian Super Liga on Saturday evening, footballnews.com.ng reports.
The 37-year-old Odita had his most successful spell in Europe whilst at Partizan, scoring 17 goals in all competitions for the Serbian giants across two and a half seasons.

Lazar Markovic and Takuma Asano scored to give the home team a two-goal advantage but Odita pulled a goal back midway through the first half.
Former Nigeria U23 international Umar Sadiq picked up where he left off before the break as he converted a spot kick to make it 3-1 in the 62nd minute, taking his tally to 17 goals for the season in all competitions.

The two Nigerian strikers did not finish the game, with the former Roma starlet replaced four minutes after his goal and Odita subbed out with fifteen minutes remaining.

Odita is married to a Serbian lady and was issued a Serbian passport in February 2015.
The former Enugu Rangers and Udoji United star has also played for clubs in United Arab Emirates, China, Belgium and Kazakhstan.